Is it possible that the Primary fight between Hillary Clinton and Bernie Sanders has exposed the existence of the Liberal’s Tea Party?  We’ve heard the Right complain for years that the Republicans were not conservative enough. We’ve heard how they no longer represented what they wanted, and how angry they were at Washington, D.C.  The nefarious “Establishment” that everyone is fighting and no one claims to be a part of, sound familiar? 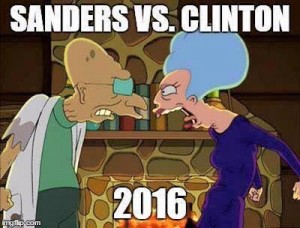 It should since it could have come straight from the Democratic debate, as long as you replaced a few “right” words with “left” ones.   Bernie says that he’s the standard-bearer of the progressive movement and everyone else is too far right. His followers are quite convinced of this, and they believe anyone who gives time to Hillary is a shill for the DNC. For example, here’s a reddit user describing how NPR is just part of the corporate propaganda bubble because they called Bernie the “insurgent senator” rather than refer to him by name in a story about Hillary.  The user is so infuriated that they plan to no longer donate to the public radio station.  Many chime in and agree that they have learned so much from this experience and how bad the Democrats really are, and the first thing to do is get rid of the two party system.  That of course would be the very system that would get them into office.  It’s interesting to me that they all believe the Democrats are so corrupt but don’t mind that Bernie is running as one, and using all of the Dems resources so that he’s a viable candidate.  I guess taking advantage of a corrupt system is OK as long as you’re the standard-bearer for progressives, and not slightly less liberal like Hillary.

But does the behavior of the supporters have any other similarities to the Tea Party?  We have seen the Tea Party rallies and the zealots on TV, or heaven forbid, the comments section.  The echo chamber that they live in is bullet proof and no matter what fact you send them, they will find a way to justify or twist it to fit their narrative.  Their beliefs have become their religion, and you really can’t discuss anything with them logically or respectfully.  Notice this time, I didn’t put a descriptor of left or right before the Tea Party nomenclature because it officially belongs to both sides now.  But am I just a Hillary supporter calling foul?

Fortunately, Bernie supporters have recently been called out by Bernie himself, to his own credit.  His supporters have gotten out of hand and been known to be too aggressive in their support of the candidate.  However, some of his supporters refuse to even believe the online attacks and harassment are going on despite ample evidence.  Glenn Greenwald called “#BernieBros” a cheap campaign tactic and a journalistic disgrace.  Unfortunately, the only disgrace is his inability to do the tiniest bit of research.  All you have to do is spend a few minutes on twitter with the hashtag and it’s very easy to find.  You can also check out reddit.com and read the r/politics  r/sandersforpresident subreddits for some lively Hillary bashing.

Now, if you talk to any Bernie supporter they will tell you that the Clinton supporters are doing the same thing.  They will quickly point to two examples of feminist icons Gloria Steinem and Madeleine Albright as they made some controversial remarks this past week.  However, Gloria quickly apologized for her misstep.  In fact, if you watch the full video below, I would hazard to guess she was making a lame attempt at a joke.  After all, she’s being interviewed by Bill Maher, an edgy comedian who’s notorious for not caring if he pisses off his own audience.  She probably feels comfortable saying an off the cuff remark and kind of chuckles as she says it, that is until she’s reminded later that we crucify anyone for not knowing exactly how their comment will play out.

Regardless, the BernieBros are hardly a good comparison to two women with years of well documented feminist credibility.  The BernieBros are a daily onslaught, and this was two isolated incidents, and one of which was already retracted.   If you want to compare against the users of r/hillaryclinton subreddit, I think you’ll find it much more matter of fact, but I’ll let you be the judge. For now, I’m sure if a BernieBro is reading this their jimmies are fully rustled, and I’ll be called a “HillaryHag” or much worse.  I’d show you some more examples of what they might call me, but I’d like to keep my site family friendly if you don’t mind.  Until then, it seems like we’ve birthed our own version of the crazy Tea Party.  They believe everything is a conspiracy against them.  There’s some mystery establishment that everyone else is a part of except for their career politician.  And most of all… They. Are. Angry.